April 2022 Business of the Month 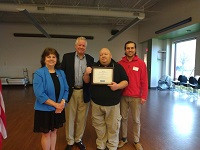 Dave started in the cell phone industry in 1988 working for Motorola in the Southern Connecticut/New York City market, then joined Metro Mobile, the original licensee for Connecticut, Rhode Island, and half of Massachusetts.  After Bell Atlantic purchased Metro Mobile in 1992, he moved to Centennial Cellular and launched their Charlottesville, Virginia market.  Nineteen months later, he was promoted to General Manager of Centennial’s Fort Wayne location, where his son, Robert, was born.

After several new positions, moves around the country, and the birth of his second son, Jamie,

Dave was offered the opportunity to purchase two Verizon company stores, one in Penfield and one in Brockport, in 2002.  Dave was at the point in his career where he wanted to make his own business decisions and not be subject to companies being sold or making poor decisions.  This purchase was the perfect opportunity to settle his family (in Fairport) and take charge of his professional life.

Dave and his team quickly expanded to downtown Rochester, Syracuse, Oswego, Warsaw, and, Albion for a total of 7 locations.  After ten years in business and more changes in the industry, Dave sold the Syracuse and Oswego stores to simplify his life and enjoy time with his family.

Wireless Zone now is the original two stores in Penfield and Brockport.  These two stores are the longest-tenured wireless stores in the history of wireless in Rochester.  Robert, who had worked part-time for his father through college, joined the company full-time in 2016.  Through Robert’s leadership, they have been able to continue to grow their customer base and made the Rochester Chamber of Commerce Top 100 in 2020!  Acting on their customers’ behalf has certainly paid off!

Thanks to a great staff, who provides superior customer service, and his wife, Cathy, who runs the books and believed in and supported Dave, Wireless Zone will celebrate their 20th anniversary in 2022!

With each phone sold, Wireless Zone makes a donation to the Wireless Zone Foundation of Giving, they have supported a local autistic charity, and have recently been supporting the Adopt a Grandparent program here in Rochester, too.

Congratulations Dave Wolmering and Wireless Zone as the Webster Chamber of Commerce April 2022 Business of the Month!