Business Person Of The Year 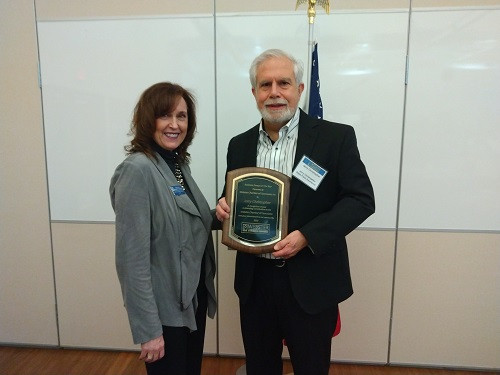 The “Businessperson of the Year” is recognized as having set a standard of accomplishment in both business and the community.  Nominations are from the Chamber’s business members who have made a significant impact on the role of business in the community.  The nominee must be a member of the Chamber for at least 18 months. They must be an active member who is always willing to go above and beyond and be a leader that motivates others. They must have a level of community participation by contributing resources in the form of time, talent, or money to our community via projects, clubs, churches, and not-for-profits.

Each year the Chamber Board of Directors receives several nominees for this honor, and the number of candidates is a testament to the Chamber member’s commitment to the community.

This year’s honoree is an active member of the Webster Chamber of Commerce and the Webster Community. He is a father, husband, business owner, volunteer, and philanthropist. He sings often – he can be heard in church, local sporting events, Veterans Day Ceremonies, and he led the National Anthem at the Chamber breakfast where he was honored. He is a regular attendee at Chamber events, a familiar face at breakfast meetings and sings his way through a multitude of community activities as a participant or supporter.

Barry Howard, President/CEO of the Webster Chamber says: Jerry always volunteers and never says no when asked. He isn’t afraid to get his hands dirty and help with the heavy lifting. He has been a Webster Chamber member for 35 years! Singing for us and the community for decades!”

Jerry operates a State Farm Insurance agency located on Empire Blvd and has been helping Webster residents with their insurance needs since 1984. Jerry and his wife Jeanne have insurance in their blood.

Jerry’s singing gigs, in addition to church and the Chamber breakfast, include the Veteran’s Day ceremonies, Webster parades (including singing and marching with the Chamber in the 2022 Webster Parade of Lights in the Village), singing and bell ringing with a Salvation Army kettle, Webster Theatre Guild performances, or a local ball game! If he isn’t singing, he is supporting local theatre groups and Webster High School musicals.

Jerry is a member of the Penfield Rotary where their principal motto is “Service Above Self”. His Rotary service includes serving chicken barbecue to raise money for scholarships, bringing food to veterans at Nucor House and sharing the meal, judging singing contests for Rotary scholarships at Penfield High School, and working on the bike drive for R Community Bikes in the city of Rochester.

Jerry is a past board member with the Bayview YMCA and Neighborhood Services in Rochester. In the “blood, sweat, and tears” department, Jerry is a regular Red Cross blood donor – giving that priceless gift to those in need in our community.

In addition to the plaque, the Webster Chamber makes a contribution to a charitable organization selected by Jerry.

Congratulations to Jerry Christopher, the Webster Chamber’s 2023 Businessperson of the Year!