2018 Business Person of the Year 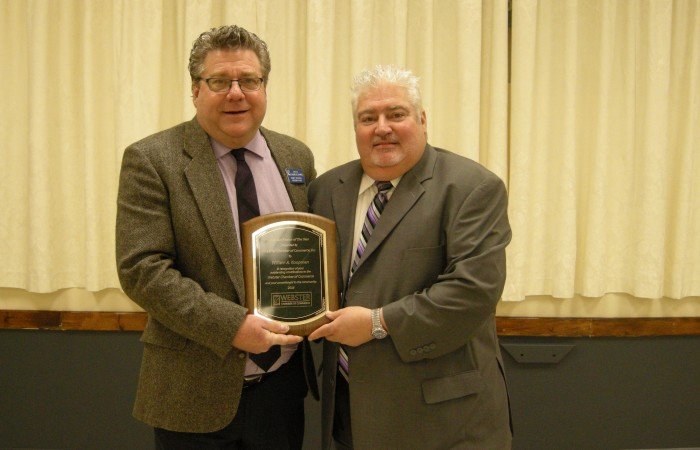 The “Business Person of the Year” is someone who is recognized as having set a standard of accomplishment in both business and the community.  Nominations are from the Chamber’s business members who have made a significant impact on the role of business in the community.  The nominee must be a member of the Chamber for at least 18 months. They must be an active member who is always willing to go above and beyond, and be a leader that motivates others. They must have a level of community participation by contributing resources in the form of time, talent or money to our community via projects, clubs, churches, and not-for-profits.

This year’s honoree is a long time Chamber member and a familiar face here at the Chamber and in our community. He has been a member of the Chamber since 1994 and has been actively involved in all of those 24 years.

He is well known for his casual dress and pointed sense of humor!

I am pleased to introduce the Webster Chamber of Commerce’s 2018 Business Person of the Year: Bill Koopman.

One characteristic of Bill’s that quickly becomes very clear in all of his efforts and actions is his immense devotion to his family. His wife Beth and their sons have known for a long time how loving and dedicated Bill is as a husband and father.

Bill has been doing public accounting since 1981 and started his own practice, William A. Koopman CPA, in 1994. The practice focuses on preparing Corporate, Partnership, Estate, and personal income tax returns. They also do weekly payrolls for businesses, bookkeeping, reconciliations, sales tax returns, and financial statements. The practice has a wide range of clients but doesn’t limit itself to any singular specialization.

Bill is on on the Governance, Personnel and Budget Committees and was a member of our Strategic Planning sessions. You have seen him help out with check-in at the Breakfast meetings and he is an invaluable helper at the annual “thank-you” dinner for the Board of Directors. Through the years, he has represented the Chamber at Good Neighbor Days, Village Days, Home-a-Rama, the Shredding Party, and the Business Expo at the field house.

In the recent past, Bill has also been dedicated to other community efforts. He volunteered for 13 years with the Founder’s Club which put on headline musical and comedy shows at the Eastman Theater for the benefit of the Sisters of Mercy. He has helped set up and bartend for the kickoff receptions, and prepared the food and helped serve the performers and patrons at the reception after the performances. The Sisters of Mercy received tens of thousands of dollars to further their efforts.

Bill’s concern for his nearest community led him to hold the position of captain of his Neighborhood Watch Association since its inception.

His interest in photography has resulted in contributing pictures of sporting events, grand openings, dedications and Chamber events to the Webster Herald, Chamber publications, and the Webster Thomas yearbook.

Additionally, the Chamber will be making a contribution to one of Bill’s favorite charitable organizations in his honor.

Read about the previous honorees: